Through CABSA as service provider, CHABAHIVA Trust developed an HIV Peer Educators programme for farms. The goal of the programme is to reduce the vulnerability to HIV and alleviate the impact of isolation on selected agriculture communities.

With a primary focus on HIV, human dignity and healthier relationships are promoted and leadership is developed. Peer Educators know their own context and circumstances better than outsiders and can therefore speak to their community in a unique way.

Working from a baseline study done in the district of Wellington in 2015, through funding from Brot für die Welt, CHABAHIVA Trust and CABSA developed an HIV Peer Educators programme for farms.

A first project was implemented in 2016 on several farms in the Wellington district. The first component was the training of 20 employees selected from the 7 participating farms. Over 5 consecutive Wednesdays they were trained in various topics and received tools to communicate with their peers. CABSA succeeded to create a safe space for participants and the overall feedback on the training was overwhelmingly positive. 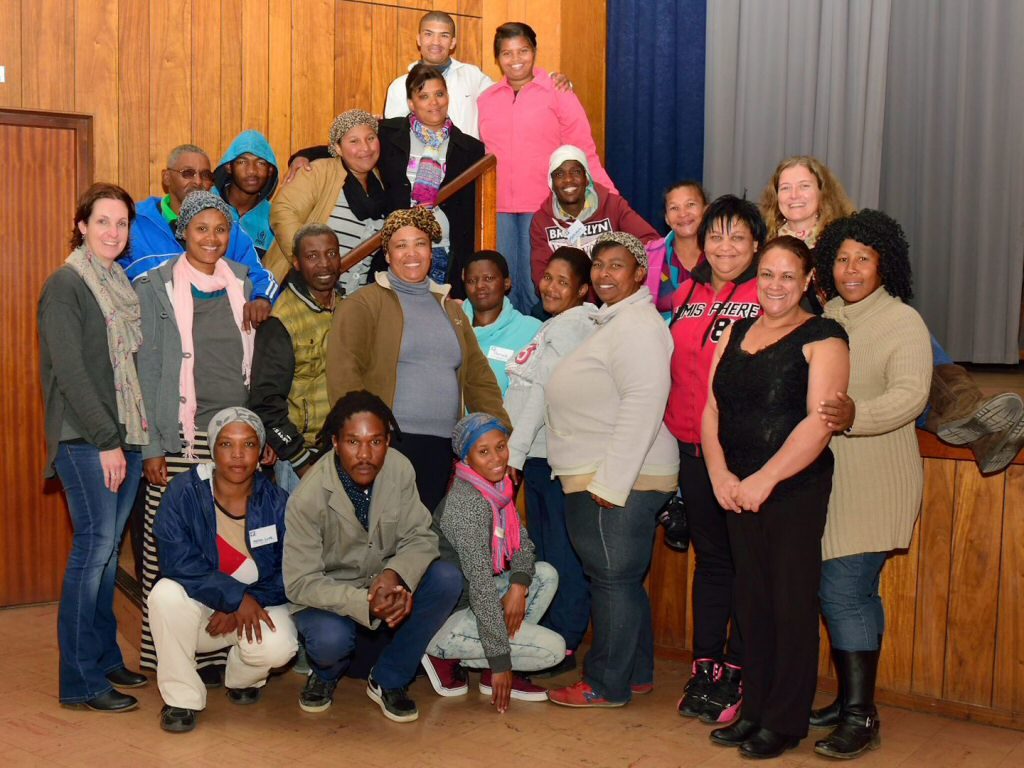 Peer Educators of 2016 with their Trainers

The second component of the project was the 4 follow-up and support meetings with the trained Peer Educators. CABSA also reached out to local churches.

The third component was an HIV Family Health day in the community on Saturday 26 November 2016. The main purpose of the event was to encourage people to know their status and therefore HIV testing, together with health screenings, were organized for the day. With the slogan “I care about my health” the day was also about family and health with many entertaining activities. NORSA (a local NGO contracted by the Department of Health) provided the HIV counselling and testing.

Highlights of the day were:

• the support of local businesses to sponsor prizes for the competitions;

• the support of a few key role players in the community;

• the constant queue of people waiting to be tested and

• the fact that 120 people volunteered for HIV testing. The hard work of the Peer Educators contributed to a festive atmosphere that drew more than 300 people!

The project was concluded with a special evening where Peer Educators received certificates that confirmed their participation in the three components of the project on the 7th of December 2016.

The positive feedback and success of the 2016 project motivated CHABAHIVA Trust to ask CABSA to invest more into this specific community and to also expand to the district of De Doorns.

A Peer Educator Refresher was presented in Wellington for 14 Peer Educators that were trained in 2016. This was to sharpen their knowledge on HIV and AIDS and to focus more on what it means to be a role model and peer educator in your community.

A further 18 employees were selected from farms in Wellington and De Doorns and they attended the five-day Peer Educator training over five consecutive Wednesdays or Thursdays. The training empowered them with information and tools to share HIV information with family and friends and it assisted them to grow as Peer Educators that can support people who are living with HIV or have questions about HIV.

To ensure the continued impact of the project, CABSA remained in contact with Peer Educators and a number of follow-up sessions were arranged in both Wellington and De Doorns. These meetings were conducted in the evenings after work as to not interfere with work responsibilities. This was not easy for everyone to involved, but the majority of the group stayed committed. 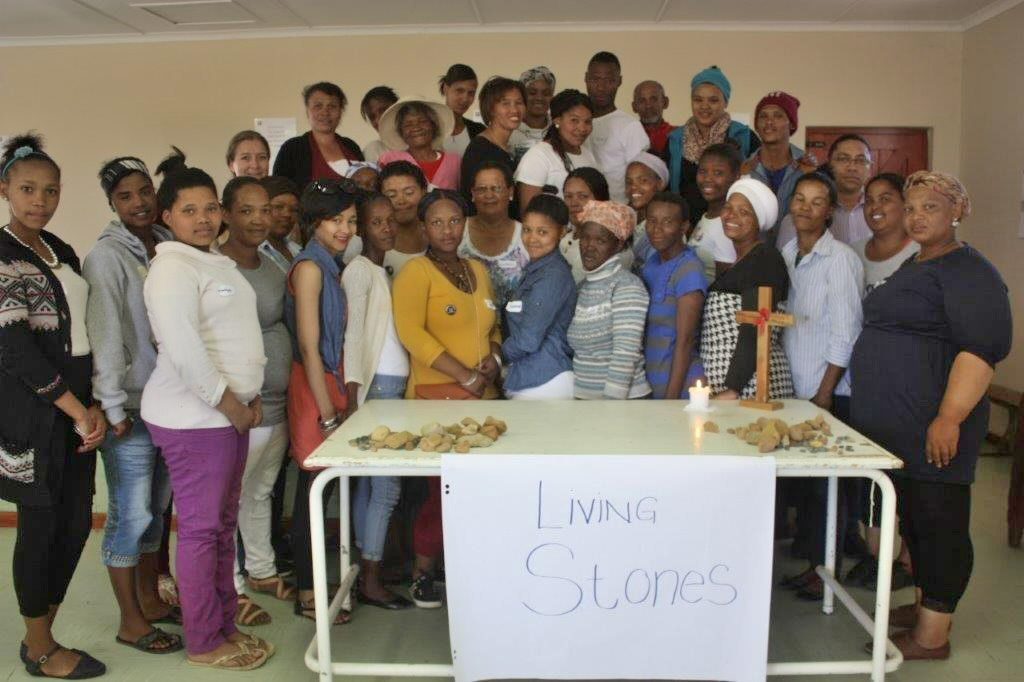 The Peer Educators from De Doorns arranged a one-day HIV awareness workshop in their area that was attended by 34 people, indicating the need for more information.

One Family Health Day was organized for each area. The Family Health Day in Wellington took place on the 12th of November at the local farm school, Bergriver Primary. It was attended by 340 adults and children of whom 120 participated in the HIV testing and other available health screening.

The Family Health Day for De Doorns was scheduled for the 2nd of December at the Rabie Primary School. It was attended by about 160 adults and children of whom 41 participated in the HIV testing and other health screening. The HIV testing services were offered by NORSA. 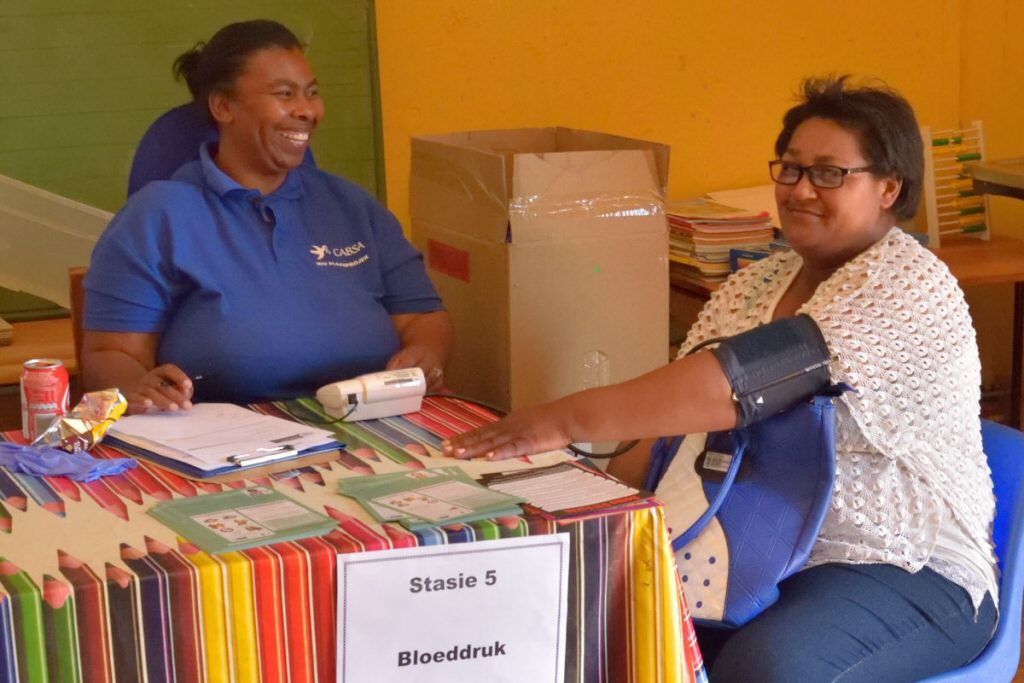 Health screening at one of the Family Health Days.

In Wellington and De Doorns the projects were concluded for the year with certificate ceremonies.

Proper monitoring and evaluation tools were utilized throughout the project. This included a pre and post training questionnaire that were completed to assess the change in attitudes and knowledge of participants during the course of the training.

To ensure the continued impact of the project, CABSA remained in contact with Peer Educators and several follow-up sessions were arranged in both Wellington and De Doorns. These meetings helped to:

– keep the Peer Educators connected with CABSA and each other

– follow-up, encourage and support each other, and

– plan the Family Health Day together.

CABSA hosted an additional One Day HIV awareness workshop in De Doorns, organised by Peer Educators, for people from the farming communities with a keen interest in more HIV information. The workshop was attended by 39 people from farms and 13 Peer Educators.

The Wellington Family Health day was hosted at Soetendal Primary, adjacent to the Soetendal Clinic. It was attended by just over 250 adults and children. A highlight was that CANSA participated in this year’s program by offering breast cancer screening. About 40 women used this service. At least 68 participated in the other health screening of which 60 were tested for HIV. 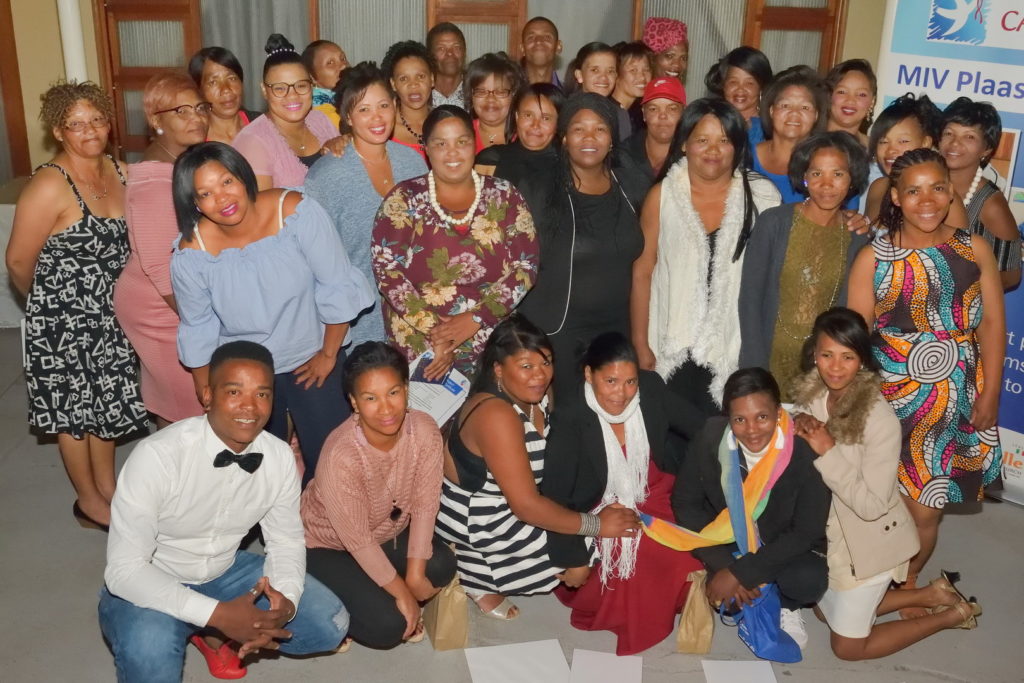 Certificate evenings were arranged for both groups to thank active peer educators.

CABSA completed the financial year’s activities with an HIV Peer Educator training of 8 farm workers in the district of Caledon. 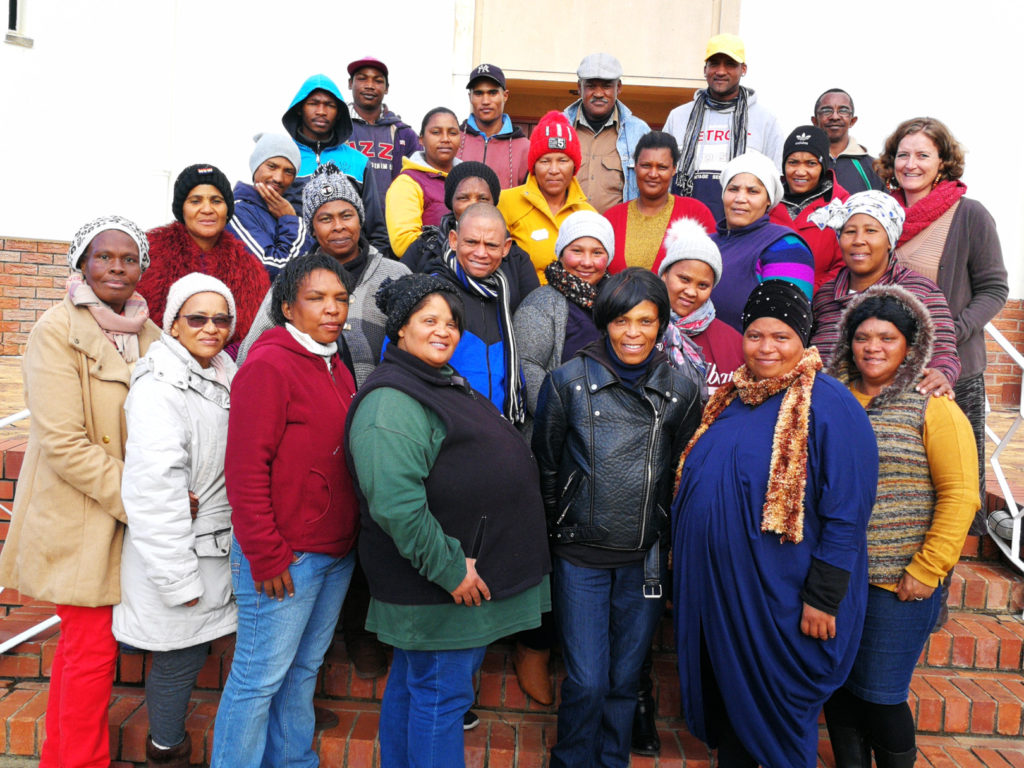 Through these trainings community members (employees) with leadership potential were empowered with information and tools to share with family and friends. They were further mentored to grow as Peer Educators that can support people who are living with HIV or have questions about HIV. In the refreshers additional information was shared about Gender Based Violence and Peer Educators were also challenged to share HIV information with young people.

CABSA again added significant value to the projects through regular follow-up sessions with Peer Educators. As these meetings happened in the evenings, it asked from Peer Educators to give their free time after an exhausting workday. In addition, CABSA also gave personal attention to several Peer Educators who experienced difficult times. 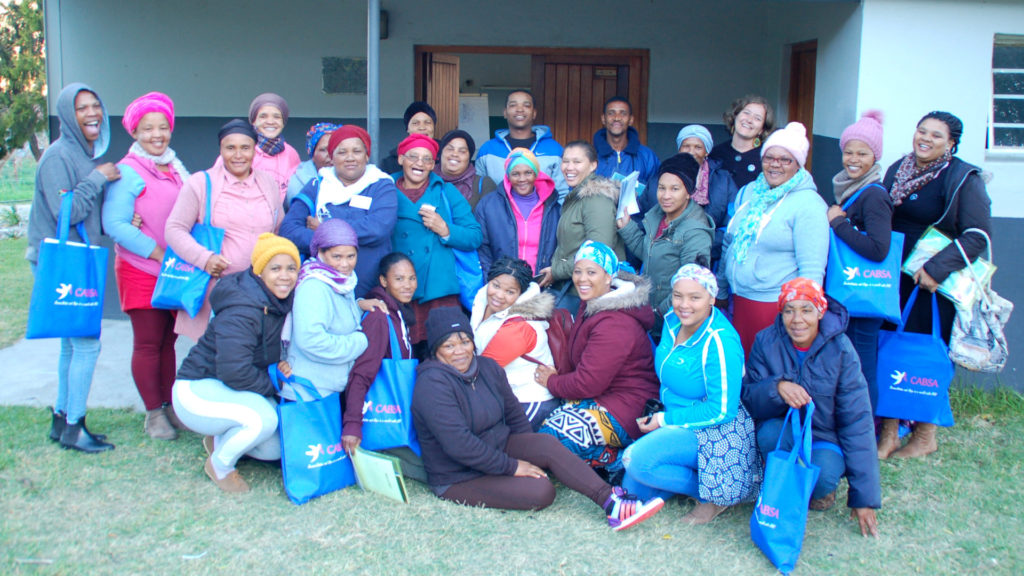 Two additional workshops were conducted in the De Doorns district. The De Doorns peer educators were responsible for the recruitment for the workshop. The community again surprised CABSA with how many people were interested enough in this topic to sacrifice a Saturday to attend the workshop. This workshop was attended by 22 people of whom 12 were male and 10 females.

The other workshop in De Doorns were sponsored by the Community Chest and was aimed at young people. The peer educators recruited the participants and it was attended by 14 males and 22 females.

The Family Health Day in Wellington was attended by 310 people, of whom 121 were children younger than 18. Eighty-three people participated in the general health screenings and 104 participated in HIV testing and TB screening.

In De Doorns, CABSA moved the Family Health Day to another farm school, Orchard Primary. In total, 540 people showed up of whom 362 were children younger than 18. 122 people participated in the general health screening and 180 participated in the HIV testing and TB screening.

HIV testing and TB screening services were provided by NorSA staff, and in Wellington CANSA also provided breast cancer screening. The Christian Literature Fund donated pamphlets for all the goody bags, gifts for the winners of the colouring competition and a Bible booklet for each of the children participating in the colouring activity. 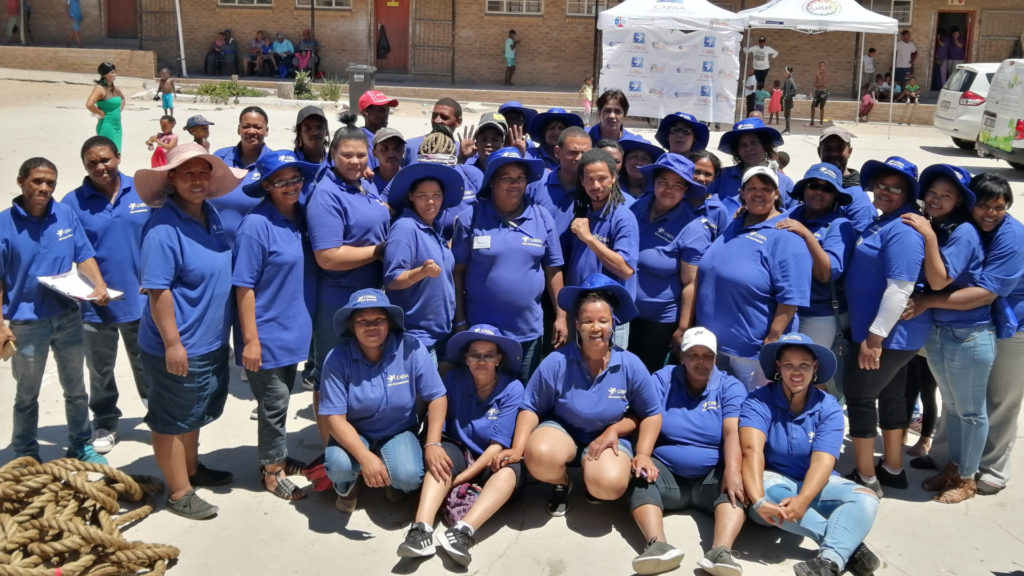 CABSA has developed a rewards point system whereby Peer Educators earn points for attending, participating and initiating events. Those with the highest points are then selected for special events where they are rewarded for their continuous contributions to the projects.

Proper monitoring and evaluation tools were utilised throughout these projects.

The CHABAHIVA Trust continues to bring HIV knowledge to farm communities in the district of Wellington and De Doorns through the implementation of the HIV Peer Educator programme by CABSA. This has, however, been limited by the lockdown and other precautionary rules that resulted from the Covid-19 epidemic. CABSA continues in these strange circumstances and also supports the Peer Educators to manage the Covid-19 situation.

CABSA continues to network with the Department of Health and other role players (e g churches and employers) in both districts of Wellington and De Doorns. CABSA and CHABAHIVA Trust have become convinced that it is more urgent to expand the farm project to other provinces with a much higher HIV Prevalence, and the Eastern Cape was identified as one such province that should be able to benefit from the HIV farm project. This expansion toward the Eastern Cape has also been restricted by the Covid-19 situation.

Community engagement will continue through direct involvement of CABSA and through the Peer Educators as well as exploring to support and partner with other initiatives aimed at the agriculture community.